VOTE FOR YOUR MAP! The results

A good quality map is a must have for any event, and historically we have had these specially made by companies such as Harvey and Stirling Surveys who use presentational styles very familiar to Orienteers. However, as many OMM competitors do not have an orienteering background this can mean another hurdle for newcomers to the sport.  To address this issue we attempted to use the OS Explorer map last year with the aim to produce a clear, informative map that was more accessible for all users.

Those of you who competed in the October event will be aware that there were map production issues which were not acceptable, we received some quite justified comments and I assure you we have listened and dealt with these issues returning to our normal high standards. However, before we scrap the idea, we thought we’d ask our experienced Mountain Marathon community to help in reviewing a range of maps.

The 2014 event was held in the Cheviots, we used the 1:25,000 Explorer map reduced to 1:40,000. The feedback from 2014 was that the map was difficult to read and didn’t make it easy to see the shape of the land (and thereby enable appropriate route choice). This was partly down to the reduction in size of the features but also because of the colour representation – with very narrow contour lines in light brown proving difficult to see on a yellow or green background.

We therefore asked our community to vote on which map they would prefer to use in the 2015 OMM events moving forwards and below are the 5 best options we think are available:

Many OMM competitors are very familiar with Harvey’s maps which have been used for many previous events. They emphasise contour features and are based upon a recent PG plot. 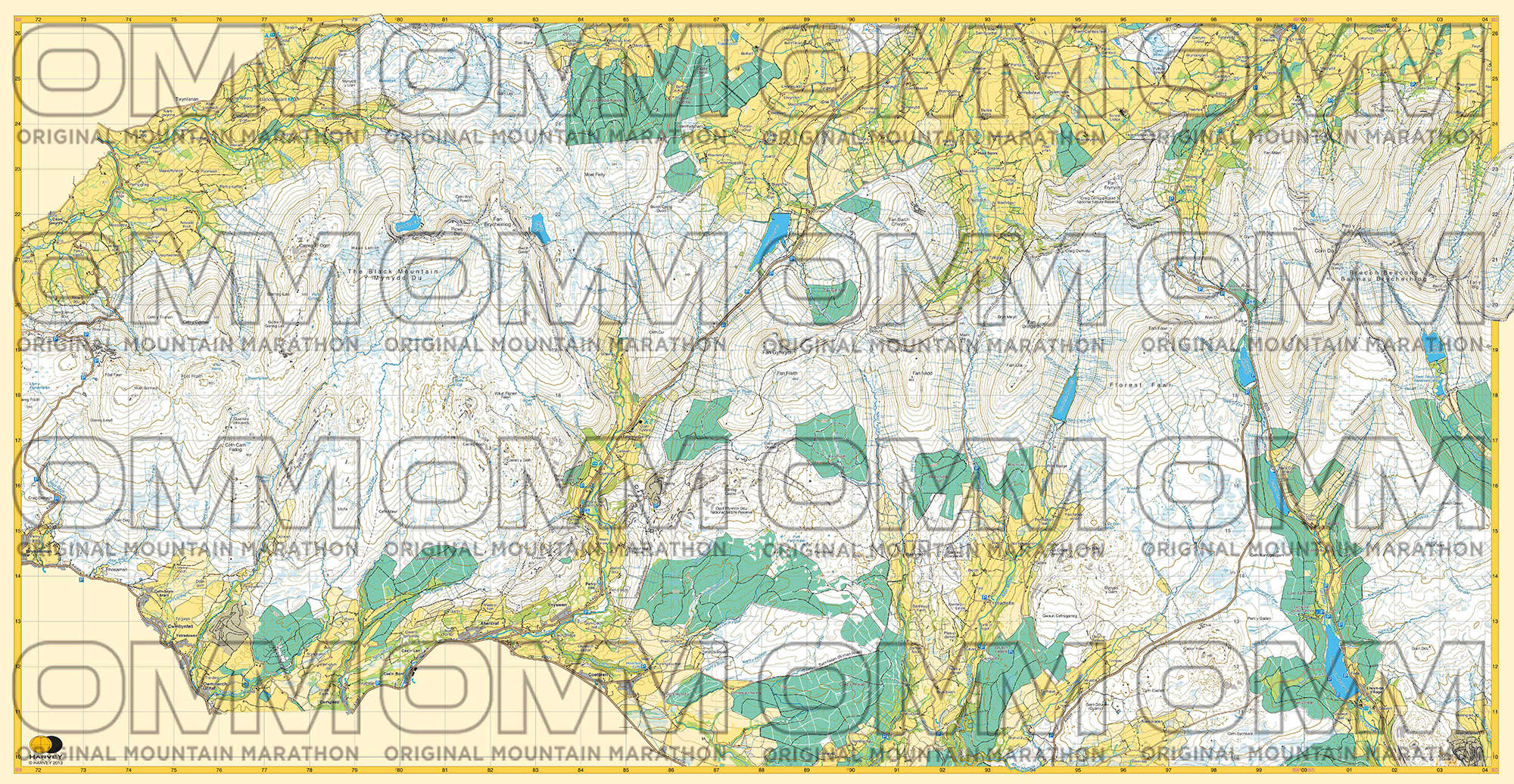 Similarly many OMM competitors are familiar with Stirling Surveys’ maps which have been used for half a dozen previous events. These are re-drawn from OS maps to emphasise the detail that is important for mountain navigation at speed. 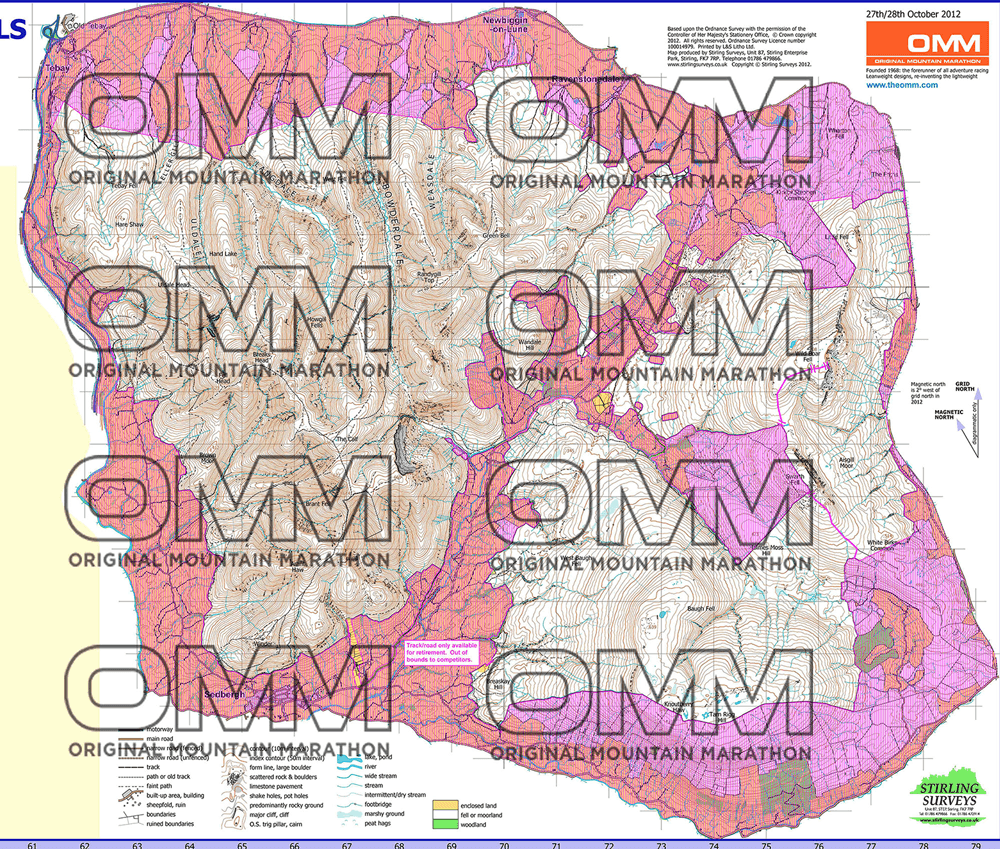 OS maps are very familiar to mountain walkers to produce a 1:40,000 scale map we reduced the 1:25,000 map last year making it difficult to see the detail. We believe that we would be able to overcome this issue by working with OS to emphasis important details. 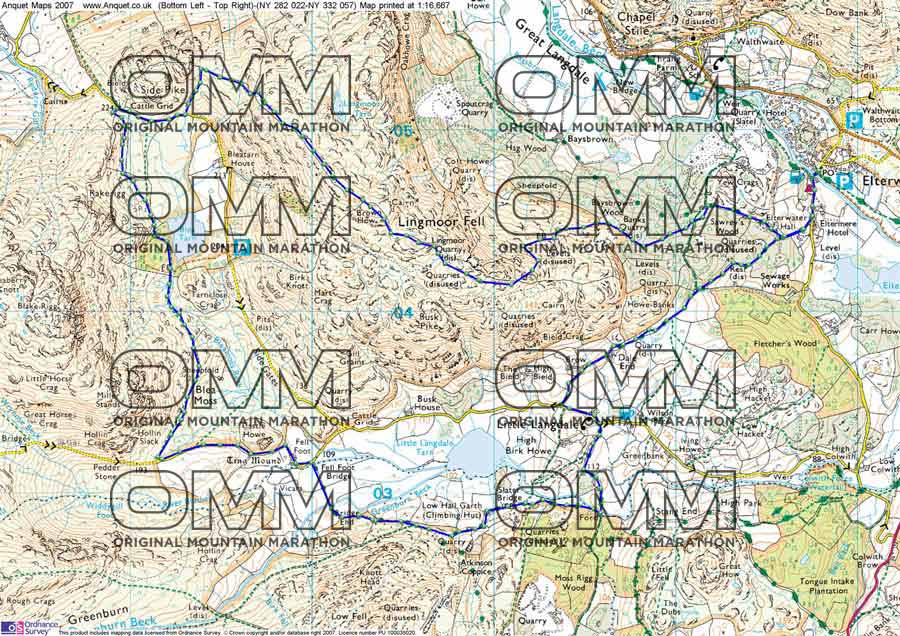 Lovell John have provided an example map showing the style they could provide based upon an OS or an Open Source map. This example uses a 50m contour interval but of course a final version would use 10m or 15m intervals. An important aspect is the use of hypsometric tinting (colouration) to emphasise the hill shapes. 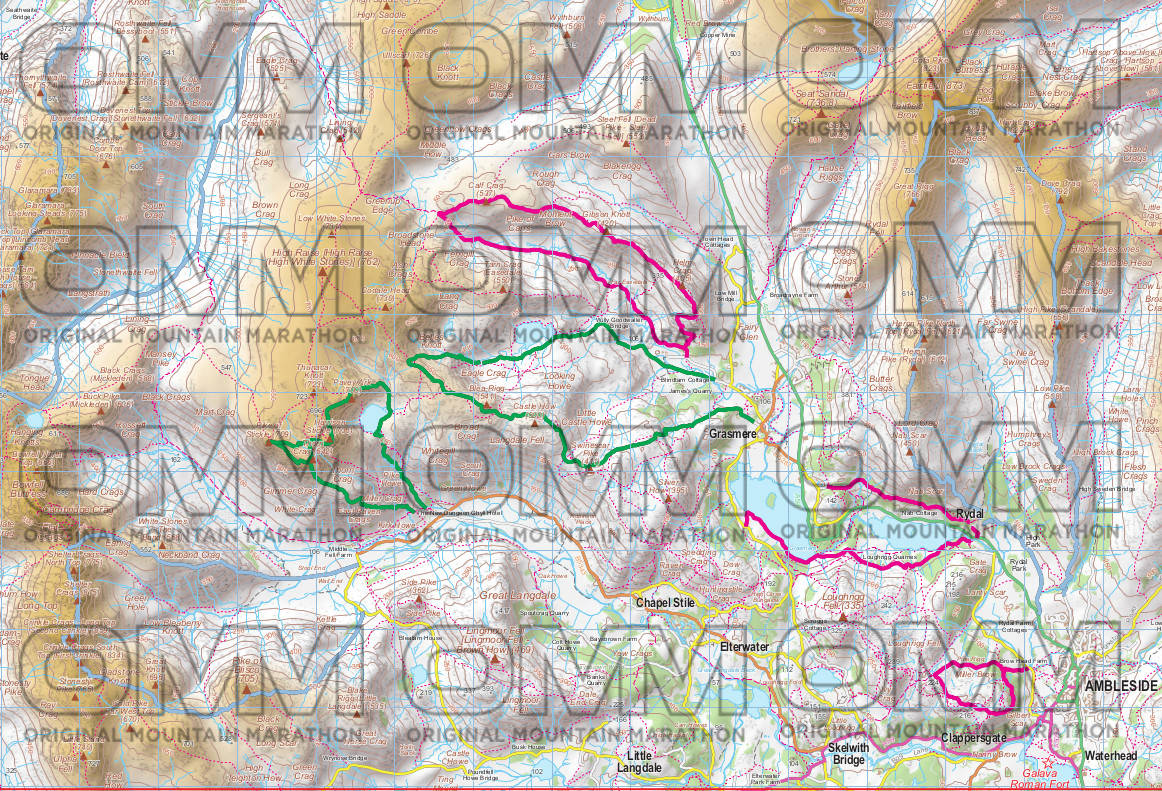 Many of you will also be familiar with Dave Peel maps which have been used at many Orienteering, mountain biking and mountain navigational events. Here is a 1:25,000 map used at the recent Peak Raid. 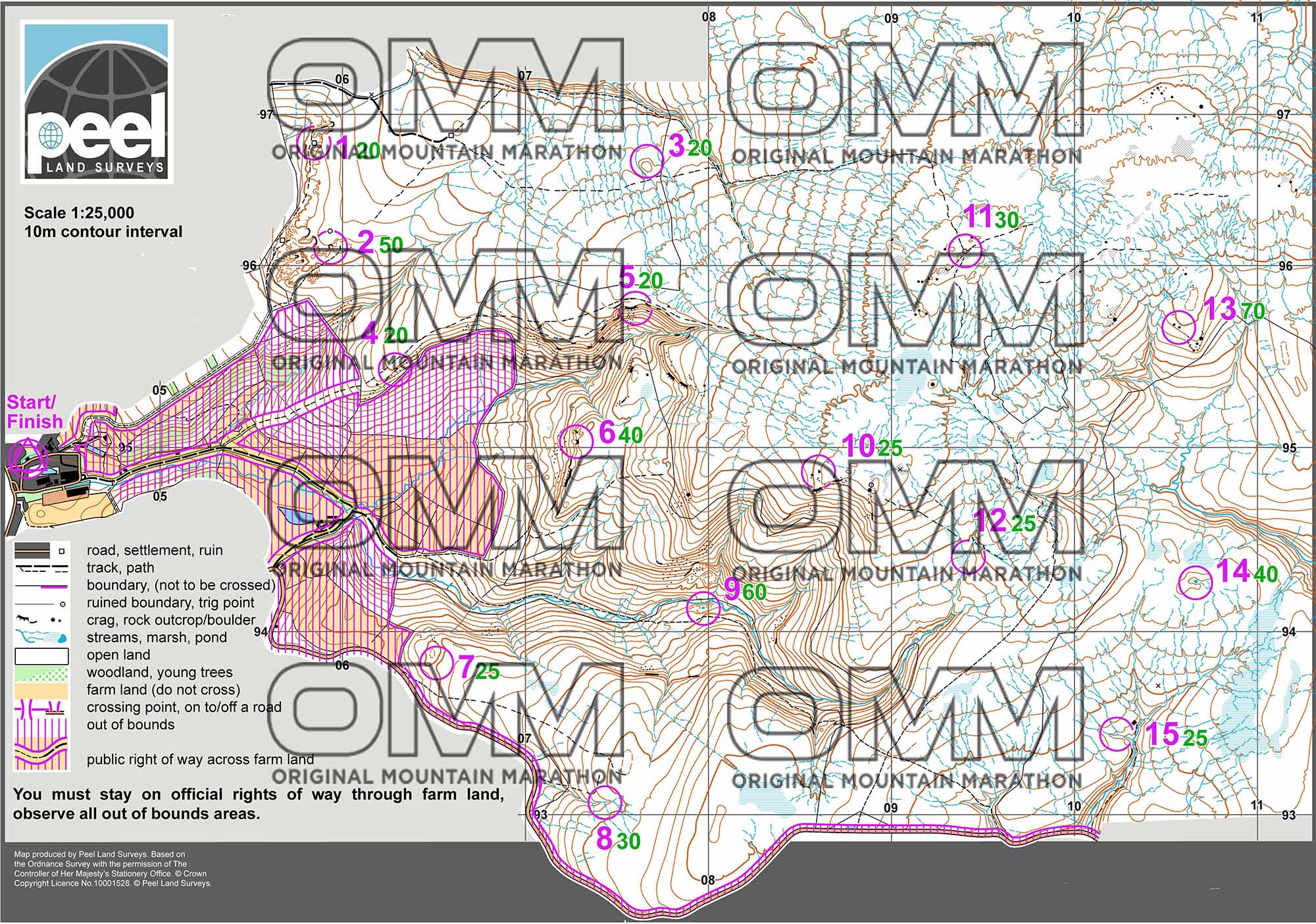 We tried to provide everyone with a way to get involved in the process and setup a poll of the 5 options on our website. After a couple of weeks we’d received 638 votes which was great and gave us a nice sample size and a good guide as to what the majority thought.

You can see the results printed below but out of the 638 that voted nearly 45% was for Harvey maps followed by Stirling Survey maps second with 25% of the vote and, most interestingly, Ordnance Survey, the prominent map amongst in the (doesn’t make sense??) UK mountains came third. 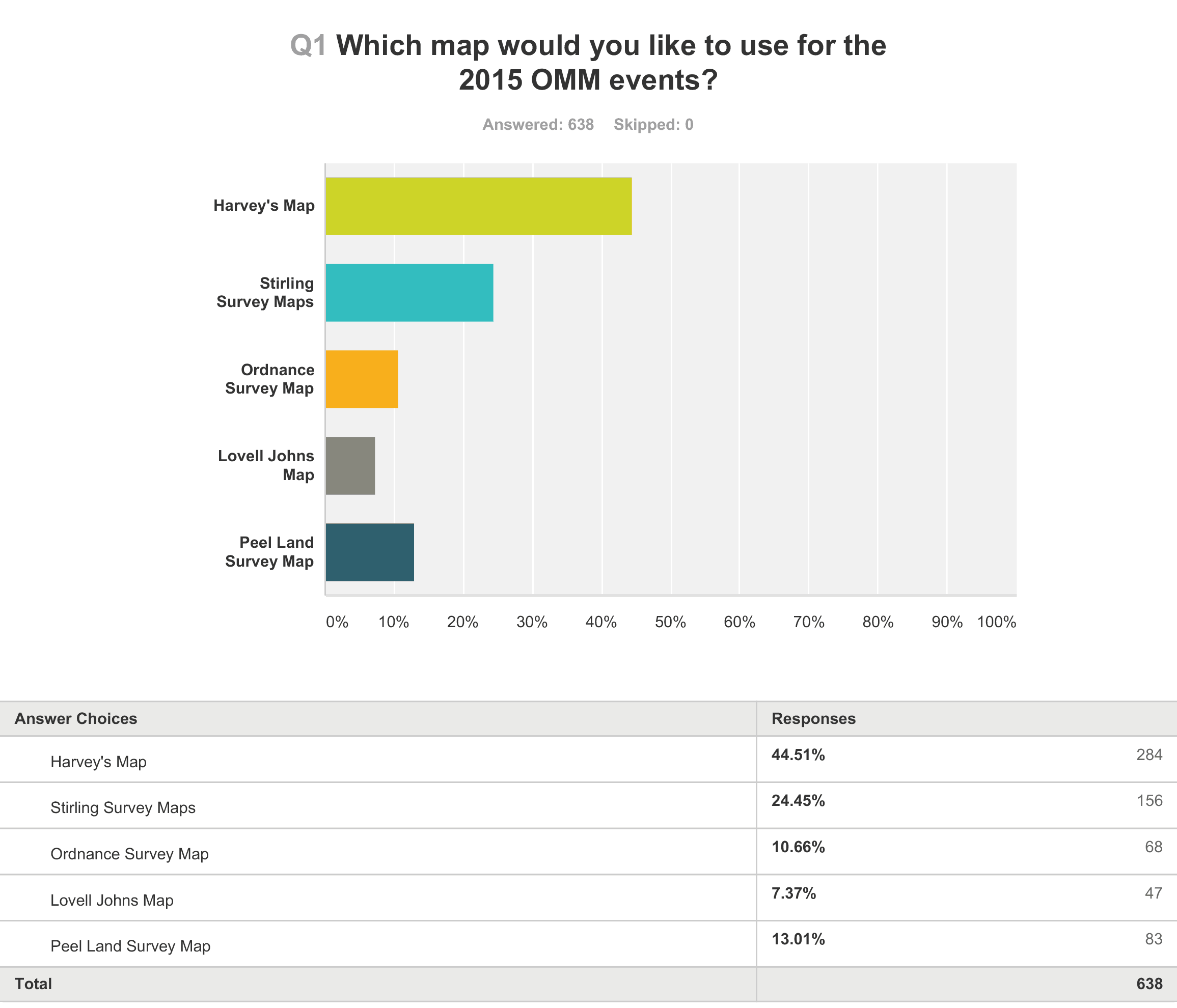 It was also great to get some solid feedback and some of the comments definitely gave us something to think about.

„Just voted Harvey. Sterling looks similar (as used Howgills OMM) but interested what difference to Harveys given Sterling based on OS. Traditional OS ok only in situations where 1:50k enlarged to 1:40k gives enough information ( i.e. barren Scottish Hills!). But don’t need 10m contours. Which map is best rather depends on how complicated the area is in terms of topography and man-made features paths/fences. Peel maps were ok on Peak Raid but I had to work out the alternative orienteering type symbols used so don’t get my vote. Never seen Lovell map- they look rather colourful“ – Richard Bradbury

„Harvey 1:40k maps are best – they clearly show marshy ground, black contours show rocky terrain and scree slopes clearly shown. Form lines show the significant shape of the ground if it is in between contours. It is a map designed to show information useful to walkers and runners Second choice – Sterling Surveys 1:40k – a good clear map but the information specifically for walkers and runners is limited. Steer clear of maps with a background colour wash (OS 1:25K reduced) or hypsometric tinting – this makes micro-nav using small contour features difficult especially in poor light.”

„For what should be the premier and toughest Mountain Navigation event competitors should be able to a) use and b) will benefit from an Orienteering Style map and therefore the best should be sought. From those that have experienced the Peel maps (including me) the impression I get is that they are highly regarded. For me they have put an emphasis on strong and accurate navigation. To some extent if you cant cope with that sort of map – and this might come across a touch elitist – you perhaps should not be on a Mountain Marathon at the end of October in wild places. In second place I would choose a Harvey’s Map – again they do the business. Third place Stirling Surveys. NOT Lovell John’s or OS.“ Mike

With this feedback in mind our hill marshals, race coordinator and event director all got around the table together to make the decision. With a wealth of knowledge and experience of each map type and with backgrounds in orienteering, mountain rescue, royal marines and of course, mountain marathons, they spent the evening discussing the pro’s and con’s of each of the nominated maps.

After a long evening they finally reached a decision and here it is:

OMM are pleased to announce that we have arranged with HARVEY maps to produce the map for the event for the next 3 years starting with the 2015 competition in the Scottish Borders.

Harvey maps are different. They are no-compromise, specially ‘made for the mountain’ maps.  The mapping is exceptionally clear and includes all the features required for accurate navigation. The mapping is designed to be used at the distinctive 1:40,000 scale. This ‘Magic Scale’ enables it to show clearly the information most needed by people enjoying Britain’s countryside, hills and fells.  The maps use 15m coloured contours. Paths and tracks are shown in detail.

The precise 15m coloured contours enable easy identification of hills and valleys, which helps give a 3D impression, providing an immediate picture of the ground. Bright colours distinguish forest and farmland, and the inclusion of marshy ground, boulder, scree and rocky ground help you choose your route.

For those new to Harvey maps, here is their own explanation of their Philosophy…..

Walking for pleasure is a glorious activity enjoyed by people of all ages. It is relaxing and good for the spirits and is now recognised as one way people can keep healthy and active throughout a long and satisfying life. It is the map that opens the door to exploration of new places enabling people to find enjoyment in fresh views, different countryside and interesting wildlife.

We set up the HARVEY Maps in 1977 to produce maps that would give people the freedom to enjoy walking and running in open spaces. From the beginning we sought to make our maps clear and easy to read. We passionately believe a map should be an aid, not a challenge. Later we applied this thinking also to cycling maps.

We think it vital that our maps are detailed, so users can find their way confidently. To be reliable they also need to be up-to-date. To achieve these aims we construct our maps from original air surveys. That way we can spend extra time on the contours, for example, and we leave off things you don’t need when you are using the map outdoors – so no parish boundaries.

For us, mapmaking is an art as much as a science. Our skilled team of cartographers concentrates on making each map pleasing to the eye, but above all serviceable and reliable.

This focus on practical use has been recognised over the years by 9 awards for quality and innovation. We are constantly on the lookout for ever better ways to show the information. Users tell us that HARVEY maps are the best in the field when it comes to navigating in the hills. This is our aim. We invite you to try them for yourself and we believe you will join our fan club!

So there you have it the OMM 2015 in the Scottish Borders will use Harvey maps at 1:40k.

We have found this very useful and thank everyone who took the time to vote and contribute to the decision making process.

We look forward to seeing you all in October.